Wave Picking vs Waveless…Which is better for eCommerce?

As eCommerce continues to grow exponentially along with two-day, next day, and same day delivery methods becoming the standard; a faster more dynamic way of picking is required. One of the factors that has led to the demand for faster shipping times is the introduction of Amazon Prime. This membership, which offers 2-day shipping for its products, was launched in 2005 and now has over 150 Million members.

So, when it comes to picking for eCommerce, is wave picking or waveless picking better? Are there other picking methods that work better?

Wave picking is a picking method of creating groups of orders (waves) that are released to the warehouse on either a predefined time or manually by the warehouse manager. The waves are a ‘group’ of orders that are related. Examples would be carrier/carrier service (i.e. next day overnight), number of order lines, type of box required, etc. The underlying theme of a wave is predefined by the profile of the orders that make up the wave, making the warehouse picking operation more efficient. Using a system, such as a WMS, waves can be created based on pre-defined rules or they can be manually created and released. Waving is the equivalent of an ‘electronic folding table’ which in the past, was used to sort orders before being given to the warehouse for picking. Other examples of waving: group orders by level of priority, destination, customer, product attributes, etc.

Waveless picking is form of “batch picking” where multiple orders can be picked at the same time, but this process is dynamic meaning that new groups of orders can be added.

In a warehouse fulfilling eCommerce orders, a process needs to allow for changes. Meaning if a warehouse worker is picking orders and a new order was just placed for an item along that warehouse workers path, in waveless picking, the system can add that order, so the item is picked along the way. In wave picking, that order would be placed in another wave requiring another lap around the warehouse and delaying when that order would be shipped. So, in a waveless pick, the picking method will determine what is being picked. Picking multiple orders at a time will be the most efficient method as making one pass through the warehouse is more efficient.

The ARC Advisory Group’s 2020 Warehouse of Tomorrow study included a question regarding order and release methods; 71% of respondents said they used system directed batching/waving and 35% used waveless (dynamic release) fulfillment. Of those 65% of respondents who do not currently use waveless fulfillment, 58% said that they expect their operations to adopt the use of waveless processes and technology in the next 5 years.

So, is waveless picking better? Maybe. Understand the definitions and the relationship to the picking 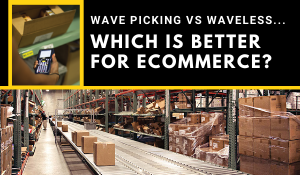 method. Your warehouse might be fulfilling orders that come from a variety of sources, have different shipping deadlines, and have a variety of shipping destinations whether it be to stores, distribution centers, or consumers. So, you can divide up these orders into different picking processes depending on these factors. So, most likely the answer is…both methods co-exist and really depends on the order profile and workflow.

If you would like to know more about different picking methods or about our Warehouse Management Systems, we would love to answer your questions and help come up with a solution that works best for you and your warehouse operations. Contact us today.